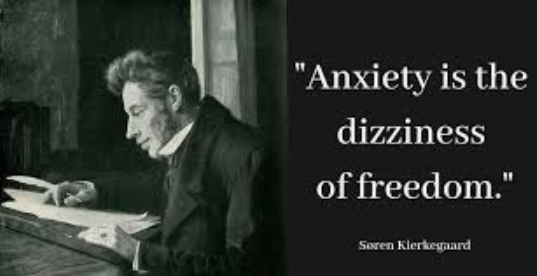 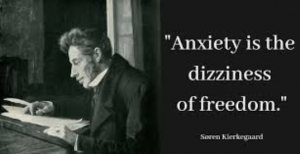 For a change I’m simply going to shoot from the hip, as that wonderful North American saying has it, and tell you some things about Denmark’s only world renowned thinker without any detailed referencing. Søren Kierkegaard preferred to be called a thinker, rather than a philosopher. One reason for that is that he described the philosophers of his age as having accomplished the perverse miracle of turning wine into water. He also suggested that when a city was getting ready for a hostile invasion, philosophers should rush up and down the street, just like Diogenes did when the ancient Greek city of Corinth prepared for siege. When Corinthians – yes they were and are a thing – asked Diogenes why he was rolling his tub up and down the street, he replied that he wanted to look busy like everybody else. With these quotes alone, we can see that Kierkegaard’s thinking and writing was not only incredibly perceptive but also very funny. Where did Kierkegaard get this rep that he was exclusively doom and gloom? He drank wine to beat the bands and was often the life and soul of the Danish coffee and pastry shop – the Konditorier  – and high society soirees to boot.

Of course Kierkegaard wrote about depression, and he was by his own nature depressive, but that was not his view of human nature as a whole and he described depression as a shout for freedom. And do you see this question of sin? According to some, Kierkegaard was no fun at all and ruled out all sorts of sexual fleshliness as being sinful. Quite the reverse is the case. Kierkegaard actually said that sensuality in love was vital for its full expression. The sin came in selfishness. That is, that you fell in love with someone else but failed to then embrace the world because of the joys of that love. Kierkegaard’s other main description of sin – called a category – was untruth. That is, that you were living a lie by not being your true self. You were split. We all know this to be true and we all know that it is our conscience that tells us this.

Below, I publish a poem I wrote about Kierkegaard in response to one of Ireland’s best living poets, Harry Clifton, who asks – in his train journey poem Søren Kierkegaard – what Kierkegaard would know of joy. (Night Train through the Brenner collection).

I took you south with me Søren Kierkegaard

a two day train ride to Florence from Copenhagen

hurtling through the Nordic psyche to the core of existence

The Dane opposite me professes never to have read you

in frantic efforts to look busy as Corinth prepared for war

We left on a day of cormorant mist, quiet ice and steaming coffee

no cardboard Danish for you – a connoisseur of Konditorier

the Fred Astaire of coffee shops, an intellectual athlete of  gustation

Pukkelrygget – hunchback , trousers too short for your palate and genius,

a heron on the wing

a cornucopia of original erudition

your  passionate intuition through windows looking outwards looking in

I see that Kierkegaard must not be read but embraced

the Continental drift in your style

In the depths of Germany a flayed, ravished woman flashes by,

a nun, ghastly white and roused by loving hatred

your dramatis personae – stations of the cross flashing up

So much of what you say has come true, Kierkegaard

pre-disproving Freud by showing that spiritual angst not sex

where nothingness is a fine art

When the German stations stopped  I hopped off

to hear your beloved Mozart

Finally in the soft heat and flowers of Florence

Not a philosopher but a Digter – Poet, Author and Thinker.

refusing the host and platitudes from a starched priest’s breath

you died well and honourably