If you were there, or saw the above scene at a gallery or in a movie, you might not remember the date, time or even exact place, but you will forever recollect the scene. Bring it to life again and again as it returns to you.

Do you ‘remember’, or do you ‘recollect’ something? Actually all human beings do both. Unless of course they fall victim to bouts of amnesia or aggressive forms of senility. Our profound ability to remember and recollect vast amounts of information is one of the precious gifts that all humans have. But equally profound is the difference between re-membering and re-collecting something. Don’t try and think about this difference too hard. Just feel it. Yes, you re-member a certain date for a particular reason, or the name of a distant aunt, but you re-collect (gather up again) a scene on that date, or scenes in which your aunt featured.

Thus, once you move beyond remembering the fact that your far flung aunt was called Matilda, you begin to re-collect Matilda. Even if you never met her, you will make efforts to conjure a scene about her; piece together things that people told you so as to conjure a Matilda Movie or maybe a Matilda soundscape. Or both. You are in fact being the artist you innately are. Don’t let anyone tell you that you can’t do art. Humans recollect: create scenarios and populate them all the time. And this means you innately understand and can recall moods, atmospheres, colours, smells, emotions, things or people and their features and characteristics. No human is without this gift. It is this gift that leads us to dream.

Your powers of recollection are infallible proof that you are an artist. But don’t just take my word for that, listen to the beautiful words of my guiding light and great mentor Søren Kierkegaard:

Remembering something is immediate and is there to help in an instant. Recollection is utter reflection. Thus to recollect is an art form.

(The author’s own translation and interpretation)

I don’t know where Kierkegaard gets this reputation of being perennially doom and gloom. For in his book Stages on life’s way (Stadier på livets vej in the original Danish), he writes some of the most inspiring, heartening and ‘loving-of-people’ words I have ever read. I suppose it’s because in this tabloid, quick-fix age, there is the problem that he has to be read deeply and several times over. The culture now seems to be – read a book and then never go near it again. Great thinker-writers like George Steiner and Michael Ondaatje have championed the cause of deep reading and the re-reading of the same book to discover its true beauty and significance. Deep reading of books also requires silence or relative quiet, which is hard to come by these days.

I also wonder whether Kierkegaard is being translated into English correctly. Or rather, I think he has often been translated correctly but not so as to reflect the underlying meaning in what he says and impart that to a modern age. I am personally, I admit, a champion of rewriting a book in its new language. The success of my A Fortunate Man (Henrik Pontoppidan’s Lykke Per) shows why, I think.

A facsimile of the original text of Stages on life’s way, showing the start proper – In Vino Veritas – Pre-recollection. The first paragraph contains the lines: “forgetting is the curtain that is closed; recollection the Vestal Virgin that delves behind that curtain.”

Stages on life’s way is a continuation of Either/Or. But with Kierkegaard this time trying, in my view, to work out how he will ever get his beloved Regine back now that she’s rejected a lifelong platonic relationship with him and gone and married another man. Part of his answer lies in recollection – or recall if you like – and what’s fascinating for me is that Kierkegaard says that recollection is only present if it’s a happy recall. Once we begin recalling nasty events, we zoom in on the horrible details and are back in the realm of immediate memory – remembering.

Take homesickness, as Kierkegaard does. A negative thing when you concentrate on the detail. But when you are back home and conjure that feeling of longing for home, which you felt whilst away, you not only conjure an illusion, you artistically create that illusion as a scene and all their emotions and placements until they feel right. It is a sublime feeling. To envisage homesickness once you are back home is art creation. You have created an ideal and it took quite a bit of effort. And as a work of art, it is always there. We are in the realm of the immortal and spiritual. There is nothing physical about it until it’s brought from behind the curtain again. As Kierkegaard says, try and throw away a recollection and, like Thor’s hammer, it will just come back at you – eventually.

It is for this reason that we venerate old people. Old people lose the memory of detail – it becomes shaky – but their recall of scenes in their lives is vivid and those scenes carried the scent of the humanly experienced before they were preserved and corked in the memory. The old amongst us sound the well of eternity as they delve to recollect and they are known as wise and possessing this eternal gift. The child on the other hand carries eternity within it but, as yet, has no real recollection. 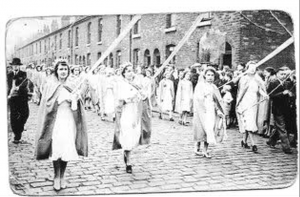 A Catholic procession near my old school in Salford – we are all artists and art is everywhere.

Growing up in a poverty stricken part of Manchester – actually Salford to which Manchester is near – with many of us of Irish immigrant stock, there was little talk of innate artistic propensities. The fact of us as human artists. Quite the reverse. But Kierkegaard told every one of us many many years ago in his beautiful text, Stages on life’s’ way, that we are all great artists. All we need do is re-collect all those scenes and moments as the artistic beings we are. We are the soul’s movie makers.

* I was unable to find the source of this image, so if any readers are aware of it, please let me know so that I can credit the creator.

** Cover of my Kierkegaard colleague Niels Cappelørn’s edition of ‘Stadier pa livets vej’ – Stages on life’s’ way (Niels’ book is in Danish only as far as I know).